The Onclin-Chabrion foundation was founded in November 1992 with the purpose of maintaining the art collection of painter Kor Onclin and to develop activities to make his art painting works accessible to a wider public. Furthermore, the foundation’s purpose is to stimulate children in the development – in a broader sense- of their expressive capabilities. 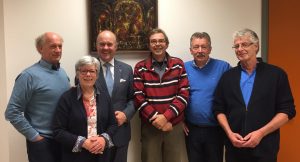 The first chairman was Kor Onclin himself; after his death in March 2003 the chairmanship passed on to his wife Marleen Onclin-Eysink Smeets.

The name ‘Chabrion’ has an extraordinary history. It is the name of the country estate in the French Ardèche (Rochessauve) where Mr and Mrs Onclin lived from 1978 to 2003. The place has been called ‘Chaud-Abri’ for centuries, which means ‘warm abode’ in French. The name ‘Chabrion’ is a contraction of Chaud-Abri-Onclin.

The reason this name is used in the foundation has a symbolic meaning. It is Mr and Mrs Onclin’s explicit request that after their demise the Committee of the foundation should call a fund into being from which means can be used to stimulate and support expression capabilities in children.

Consequently, the name ‘warm abode’ symbolizes the sanctuary that the foundation, in one way or another, will offer to give shape to all the above.

Secretariat:  Rob Vlasblom, MA, Former gallery owner in Arnhem, publicist and former teacher of philosophy of culture at the royal art and design academy in ‘s-Hertogenbosch